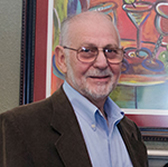 Born and raised in an Orthodox Jewish Household in suburban Chicago and attendance at the Chicago Hebrew Theological Seminary during his high school years, Shelly served a term in the U.S. Army and then turned his attention to professional theatre, graduating from The Goodman Theatre of the Art Institute of Chicago. Upon graduation, Shelly became Business Manager and subsequently Managing Director of that prestigious organization, before relocating to assume the same responisbilities at the Yale Repertory Theatre in New Haven, Connecticut. He left New Haven to take a position as Managing Director of the California Actor's Theatre in the South Bay of California. After 10 years with that organization, Shelly segued to the private sector by joining what was then Pacific Bell Telephone Company (now AT&T), serving in several instructional and administrative capacities, ultimately relocating to New Haven, Connecticut where he retired as a Senior Business Manager after 25 years of service.

Following retirement, Shelly and his wife moved to Hot Springs Village in Arkansas, where both have been active members of Congregation House of Israel. In addition to serving on the Board of Directors, starting in 2011 Shelly performed as Lay Leader of religious services at all times when a rabbi was not present. In January 2014, following a long course of study, Shelly received rabbinical ordination by the Jewish Spiritual Leaders Institute in New York City, and is now the full time rabbi for Congregaton House of Israel. Shelly and his wife, Carol, now live in Hot Springs, and have two children and four grandchildren, residing in the Dallas area.

Lorem Ipsum is simply dummy text of the printing and typesetting industry. Lorem Ipsum has been the industry’s standard dummy text ever since the 1500s, when an unknown printer took a galley of type and scrambled it to make a type specimen book.